Aberdeen entrepreneur snaps up Oil Plus 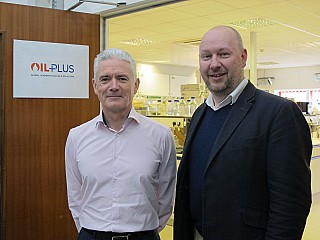 Mark Cavanagh, who has more than 25 years of experience in the oil and gas industry, has bought Berkshire-based Oil Plus for an undisclosed fee.

John Crane, a division of global industrial giant Smiths Group, is the seller.

He finally left XPD8 in 2015 after the company was bought by Smiths Group and assimilated into the John Crane unit.

At the end of that year, Mr Cavanagh became managing director of Crandale Consultants, a position he still holds. He is currently the sole shareholder in Crandale, an engineering consultancy which employs about 35 people in Aberdeen.

Oil Plus provides oil field water management, production chemistry, microbiology, reservoir souring and process engineering consultancy services. It was set up in 1978 as a joint venture between BP and Plenty to provide process chemistry and engineering support services for the Forties oil field, which was bought by Apache in 2003. BP sold its stake in Oil Plus in 1982, after which the company changed hands a number of times before ending up with Smiths Group. Oil Plus currently employs 22 people and plans to increase its headcount to 24 in the next few weeks. Its current management team will remain in place, with Kevin Murray retaining the managing director role.

Mr Cavanagh said he was attracted to Oil Plus because its business model and customer base were similar to those of Crandale. He said he would invest in Oil Plus to expand the business, but does not foresee the need for opening a laboratory in Aberdeen.

However, he said it might be desirable to give the firm a “sales presence” in the Granite City.

Mr Murray said the change in ownership represented a “great opportunity” for Oil Plus as the business targets double-digit growth over the next 12 months.

He said Oil Plus already had a number of North Sea clients who are served by the lab in Newbury, including Apache.

Keep up to date